- May 27, 2015
As i said in the last Book review, i flew through this series last week and wanted to post the reviews a bit father after each other, for one to be done with them and secondly to not spend three weeks on one book series, especially since i seemed to finally be reading a bit more and will have quite a few reviews over the next few weeks to get through and don't want to spend a huge amount of time on one series alone. So more then one update a day for a few days.

Anyways... on with it so that this post doesn't take on massive proportions as well.

Title: Insurgent
Author: Veronica Roth
Language: English
Pages:525 (Hardback)
series: Yes, Divergent Series Book 2.
Overall rating: 3 to 4 out of 5
Summary on the book:
"One choice can transform you -or it can destroy you. But every choice has consequences, and as unrest surges in the factions all around her, Tris Prior must continue trying to save those she loves -and herself- while grappling with haunting questions of grief and forgiveness, identity and loyalty, politics and love.
This's initiation day should have been marked by celebration and citron with her chosen faction; instead, the day ended with unspeakable horrors. War now looms as conflict between the factions and their ideologies grows. And in times of war, sides must be chosen, secrets will emerge, and choices will become even more irrevocable -and even more powerful. Transformed by her own decisions but also by haunting grief and guilt, radical new discoveries and shifting relationships, Tris must fully embrace her Divergence, even if she does not know what she may lose by doing so."
Worth reading? If you enjoyed the first one enough, yes. It isn't really better then the first one, thought. So if you are unsure about the first one leave it at that and find something else to read. 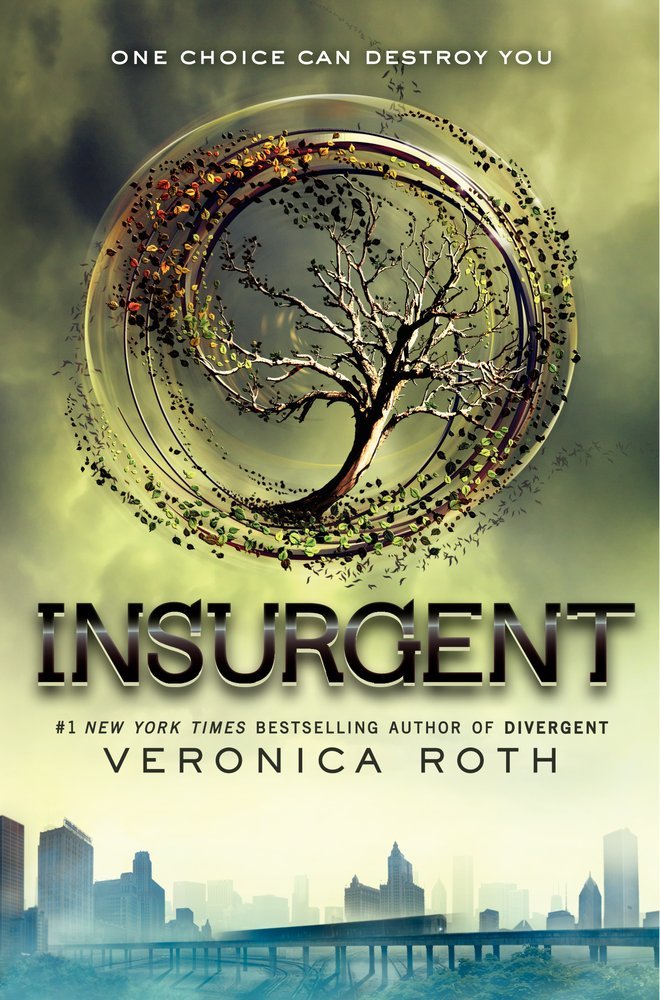 Since it is a second book in a series and to talk about it really you have to actually talk about what happened, so there are spoilers in this review. If you don't want that, just skip right ahead to the bold part where i give a very brief overview of my thoughts at the end of this post!

This book continued right from the point on where the first one ended. And i liked that. The author doesn't send huge amount of time going over what happened in the first book and gives a review of what happened, but rather just writes little bits about what happened through out the first few chapters that can easily be ignored as summaries of the first book. So that was very nice.

But overall this book was a bit worse then the first one to me.

It wasn't horrible. It was alright. But it wasn't good either. It was just... it just was.

Personally i did not enjoy Tris in this book. At all. She was very rash and didn't think her actions through, which didn't fit -at least for me it didn't- with how she behaved in the first book.

And while the "betrayals" in this book were alright, it all felt very ... lofty and choppy for me. Everything in this book was a bit of the nature "I have to have something happen here" and "there has to be something drastic happen, right now!" and not completely thought through.

I didn't think that it was very logical to let Tris go on and give herself up, especially since she clearly is "special" with her rather different Divergent-cy. So it didn't make sense for me that she would just give herself up. And i also didn't understand why Four followed. What was the real plan behind that? Where was the logic of having to Divergent people in the hands of those that want to work against them? Why give them the test subjects they want, simply because some people kill themselves? Why not just try and work against the "kill yourself" programming that the others have been injected with?

I didn't understand that entire part.

And i also wasn't shocked when it was revealed that Tris' bother worked for or with those that were testing on her and wanting to kill her because honestly that was one of the very few rather logical moments in the book. The bother wanted to understand what was happening so of course he worked with and/or for those that also worked towards that goal. And his sister was one of the few that could help figure out what was going on, so why not let her be tested? I am not saying that i would have done the same or that it was nice or good or even something anyone should do. I am just saying that that was at least something that fitted the character as he was shown in the first book and so at least Roth showed consistency in that.

I didn't understand the dynamics between Tris and Four in this book. That didn't make sense to me. At all. Because in the first book they tried to work with each other and with what they knew where the others strength to get to where they wanted to got. In this book it seems rather that the notion of every character was "i do what i want and shrew everyone else!".

I also thought that the entire "killing Will" situation was just dragged out endlessly. Yes fine, she killed him. But nobody was in their right mind at that moment and she killed others. And where the heck did the entire weapon angst thing come from? She didn't have a problem firing on into Peter after killing Will at the end of book 1, so where the heck does the hesitation come from in this book=

I start to feel like my review gets just as jumpy and all over the place as the book was.

So lets just give a briefer version and be done:

Overall it was an alright second book in a series. I didn't find that the characters evolved, rather that they worked backwards and did things that made no sense most of the time throughout this book. The entire storyline of this book was very "filler" for me, and while this book did move forwards and took the story to a new place. The overall storyline was nothing that was not already discussed and worked through in book one. So overall this book was alright. But not good. It was not horrible. But nothing special. And it could have been better, if Roth would have actual logical choices -or let the characters make them- throughout this book and not just write a bunch of strange reactions and situations together to form this book.

Did anyone of you read this book?
What did you think about it?
Did you like it?
Did you enjoy what was told and how it was told?
Did Tris make sense to you guy's?