Title: The Scorch Trails
Author: James Dashner
Language: English
Pages: 361  (Paperback)
series: Yes, second book in the "Maze Runners" series
Overall rating: 3 out of 5
Summary on the book:
"Solving the Maze was supposed to be the end.
Thomas was sure the escpae from the Maze would mean freedom for him and the Gladers. But WICKED isn't done yet. Phase Two has just begun. The Scorch.
There are no rules. There is no help. You either make it or you die.
The Gladers have two weeks to cross the Scorch -the most burned-out section of the world. And WICKED has been sure to adjust the variables and stack the odds against them.
Friendships will be tested.
Loyalties will be broken. All bets are off.
There are others now. Their survival depends on the Gladers' destruction - and they're determined to survive.
Never stop Running. "
Worth reading? Depends. If you are someone like me and started a series and/or loved the first "Maze Runner" then yes, it is worth reading. But for a second part i did not find it good enough, especially after how much i enjoyed the first book of this series. Overall i would recommend that if you did not love the first book, leave the series behind and just stop after Maze Runner! 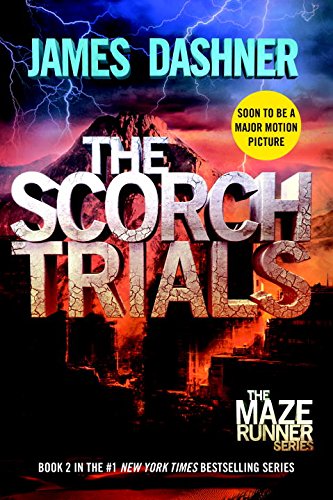 Cutting to the important part of this right away: I was disappointed with this book.

It surprised me that most people that did not seemed to have loved "Maze runner" gave a very positive feedback about this book, while i read this and through most of this book just hated this and just wanted to be done with this part because to me it was just over done and not thought out enough at the same time. How different reading options can be!

There could be many different reasons why i did not actually enjoyed this book as much as the first one in the series. One of them could be because there was quite a bit of Teresa in this book and i really did not like her at all but she actually became the kind of character that to me she was she second she was "seen" in the first book of this series.

But i think one of the biggest things that just bugged me in this book that i did not notice in this way or form in the first book, were quite a few loose ends that Dashner tried to put in because he surely hoped that it would give something to the story but to me just made this entire book stupid in a way.

There were at least three situations where i just had to shake my head and re-read the page because i thought that i missed something important and it was because of that that i just did not understand how or why something was happening.

But sadly i didn't miss it, it was just not there to begin with and sadly this book started that way from the very beginning, when for some reason the people from WICKED leave the boys for days without food. Huh? Did i miss something? Why do that when they want them to survive the trails? Where is the logical aspect from the first book, the trying to see if people could survive in such a situation and work together in trying to figure out a deadly puzzle if they need to? Apparently it burned like the rest of the world from the sun flairs that are talked about in this book!

This entire book to me read more like a "i need a second book in a trilogy" book then anything else and i really hope that the third part of this series will be better again otherwise this entire series sure took a dive down the deep and smelly end.

I could go on about what i thought was wrong with this book and how much i did not actually enjoy it, or point out the few things that i actually liked -even though only about three bits- but i want to stop talking about this book to be honest.

So what i will say is that overall i did not like this book very much and the only reason that i gave the rating that i gave the book is because i still liked the writing style -even though as i said i did not like the storyline and where and how it was told. But Dashner still wrote in a way that i appreciated the writing itself -not what was written about, but simply the writing itself. And there is also the fact that even though there were so many stupid situations and reactions in this book Thomas still made the story worth reading - at least a bit. I especially enjoyed the few situation that he and I shared the same sentiments of "what the heck is going on here?".

And i was also very happy to be finally done and over with this book so i had to give it a bit of a higher rating just because i was so happy about finally finishing it and being done with it!

Overall:
I hated all those stupid turns and completely unnecessary stupid ideas that Dashner wrote into this book in -what i believe- where only put in in hopes to write something interesting that wanted people to keep reading but to me were just completely illogical and to that came that some situations where just: "how did we get here? what happened? why did that happened? huh?" situations to me which i hate in books. I can follow confusing storylines pretty good and actually enjoy books that other people said that they hated because of the many different and similar named characters, too many different story aspects or character stories overall or confusing storylines. So it wasn't that this book was to difficult because of what was happening or how it was happening, but more because there was just too much and at the same time too little happening through out this entire thing.

To be completely honest there were so many situations in this book where i just had problems understand why and how that to me this book is actually on of the least favorites that i read in quite a while. Which is sad because i really loved the first book.

In many ways, Dashner showed that sometimes it would be better that even those kinds of stories would end after one book instead of just continue to write something to make it into a series and completely trash a book simply because a second book has to exist.

But i will read the third book and see what that is about and hope that the "scorch trails" where only the second book in a series or trilogy slump that some writers fall into and that Dashner "cured" himself -yes pun intend thank you, i know i am unbelievable funny- from his horrible writing ideas and jumping from situation to situation writings in the "Death cure". I will see or read and then talk about it. Or moan about it. Or just babble endlessly. We'll see. That is if you are interested.