And this is another book that i read a little while ago. But i am only reviewing it now... well the reason can be read in the actual review. So lets just get to it, shall we?

Title: Slave to Sensation
Author: Nalini Singh
Language: English
Pages: 334  (Paperback)
series: Yes the Psy-Changeling series -this is book #1.
BUT they could also be read as individual books, or at least this one could. And the rest of the series -as far as i understood it- are no longer about the characters from this book, but other people from this world, so i would say that you don't necessary need to follow the series or even read all of them to understand what is happening.
Overall rating: 4 out of 5
Summary on the book:
"In a world that denies emotions, where the ruling Psy punish any sign of desire, Sascha Duncan must conceal the feelings that brand her as flawed. To reveal them would be to sentence herself to the horror or "rehabilitation" -the complete psychic erasure of everything she ever was...
Both human and animal, Lucas Hunter is a changeling hungry for the very sensations the Psy disdain. After centuries of uneasy coexistence, these two races are now on the verge of war over the brutal murders of several changeling women. Lucas is determined to find the Psy killer who butchered his packet, and Sascha is his ticket into their closely guarded society. But he soon discovered that this ice-cold Psy is very capable of passion -and that the animal in him is fascinated by her. Caught between their conflicting worlds, Lucas and Sacha must remain bound to their identities -or sacrifice everything for a taste of darkest temptation."
Worth reading? Sure. If you enjoy a romance/erotica read with an actual plot. 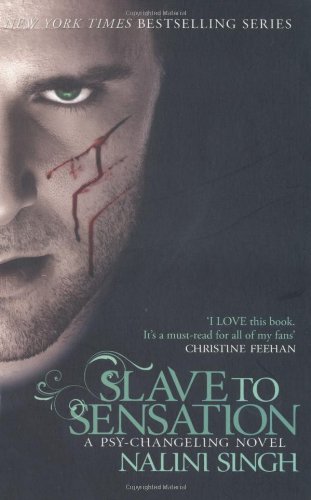 I stumbled across a free copy of this book which is honestly the only reason that i started to read it. Because it was free and i wasn't sure if it was anything i would enjoy or even like but for free? Why not try it. So i did.

And now let me explain that.

The entire book is about out there and because i did not really know what i was getting myself into it was just strange for me at the beginning.

This book deals with two "over-human" kind of people. The first are the "Psy" the people that can communicate through their minds with each other and are in some way connected to each other and more or less rule the world the book takes place in. They see themselves as more or better and don't see what emotions should have to do with anything and so they see everyone that feels anything at all as unworthy and less then themselves.

Then there is the other group, which are the "Changelings" -meaning the shapeshifter which are more common with were-wolfs and all other kinds of were-animals or generally just people that are able to shift in animals. This group of humans -or part humans- relay very much on their emotions. So the complete opposite of the Psy.

While i read this book i did not right away appreciate how deep Singh -the author- actually gone to make those two completely different groups work together quite well in a book without over doing one or the other group. So that for example the Changelings are being overly emotional -always angry or always happy for example- while the Psy are always very overly emotionless -never showing what they feel, never feeling in general.

No, Singh found a way that balanced the entire story out so that one group relayed more on one aspect then the other but still, they were human in most ways so that the reader can relate to what is happening and not just sit there and be a bit put out because who can imagine being completely emotionless?

So Singh did a really good job in finding a nice balance.

And then she had fantastic characters. She put just enough into every character that you could find something that made you interested in them and you wanted to learn more, read more, get to know them more then what Singh put in this book.

I really enjoyed Sasha -the Psy in this book and the female main character- as well as Lucas -the male main character and changeling. They worked very well together and there was no instant love or even lust that was uncontrolled.

Even though this is a smut book, this is not just about sex.

This book has sex, but it is not the main reason or main event of the story. There is many different things going on and all the of the character that play a role in this book have something going on that is not very easy. It would be easier if i would just give specific examples but that would spoil the book and to be honest if you have not read the book, not knowing what exactly will happen is kind of a good thing in this book.

Overall i enjoyed reading a chick-flick kind of book that had more to the story then just sex or two people finding a happy ending together.

This book gave more. It had a good story, a nice plot, fantastic characters and as a not over done side dish a bit of sex so that it was neither the main event nor something that was overly done or repetitive.

All in all i was surprised on how much i liked this book a few days after i finished it and really thought about how well the entire story came together and how much the author really put into this story.

And i did actually buy another book from this series and will be reading it soon to see if i enjoy it as well. So that also says something i think.

But if you enjoy reading a fast and easy book, but one that still has great characters and a good plot, try this one. It might surprise you as much as it did me.

Alright this is it for today.