Book review: Into a million Pieces

And another book that i got through NetGalley. I kind of love that side. It introduces me too all kinds of books that i might not otherwise picked up and never read. And i would have really missed a good story. Especially with this book.

So lets get into it:

Title: Into a Million Pieces
Author: Angela V. Cook
Language: English
Pages: 206 (paperback)
Overall rating: 4 stars out of 5
Summary on the book:
"Allison McKready is a succubus. So is her twin sister.
But while Allison spends her summer break hiding in the library behind her Goth makeup, Jade fools around as often as she can. Allison can't believe Jade would ignore their mother's fatal example so recklessly, but concealing a cursed bloodline and its dangerous effects is far from Allison's only problem.
Mean girl Julie's snob mob is determined to ruin her summer, and Aunt Sarah's Bible thumping is getting louder. Only her new friend, Ren Fisher, offers safe haven from the chaos of her life."
Worth reading?
I think so, yes. 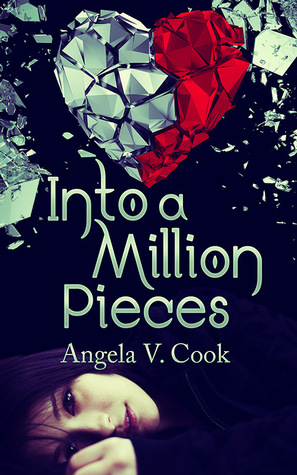 I have to say that when I read the summary and reading that this book was about a girl that was a succubus I was just curious to see where this story would go.

I haven’t read a mystical creature story for quite a while and I never heard or read anything about this book. I was just overall curious.

And the cover is very intriguing because it really gave nothing away about the story and still drew me in.

I had a few thoughts and expectations about this story before I started reading it.
Would it be dark and twisty? Would it be mystical or did the author take it in the opposite direction and make it a romantic, sweet story full of misunderstood romanticized mystical creatures that only need to be loved to be nice?
I was wrong in all of those thoughts.
It started out very normal and, in a way, slow –at least looking back and knowing where the story goes and how it picks up-, introducing the characters and their storylines, starting to evolve and going into more then just the rather normal life of two twin girls who live with their aunt after their mother committed suicide.
And until about 60 or so percent into the book it is a rather normal teenage fantasy book, where we as the reader know something has to happen, because we know that the main character is not normal in the typical sense and that something will happen because of that but until that point nothing really happens in that aspect. Sure that are little hints and situations that showcase how difficult it is to have powers of some kind as a teenage girl and how life sometimes surprises you and all that. But the actual story and the parts that really suck you in –please excuse the pun I couldn’t resist- starts after two thirds of the book are already over.
And hello mister, the story picks up fast and furious!
There are turns and twists and unexpected situations and events happening on about every second page. And all of a sudden it is not just a normal YA fantasy book with the typical romantic difficulty aspects, but rather a mystery with intrigue and deaths and murder –or is it?- and people that are not what they seem to be.
It completely crashed into me unexpectedly, how involved and deeply the different aspects of the story gone.
I did not see the turn coming until I read it.
Which honestly I kind of pride myself on figuring those kinds of mysteries like those in this book out before the author directly points you too it. Not with this book. Did not see that twist coming until about a page and half an explanation into it.
And at the end of the story I kind of just started at my kindle and had no idea what the heck just happened and what I was supposed to do with what I just read.

And that wasn’t because the ending was bad it was just rather open and I would have preferred if it was not as open was it was, especially since I am not sure if it is a book in a series but I don’t think so and in many ways that would be better (if it is not a series I mean because the story is told and finished quite fantastically so as well but at the same time i want more!).
What I can say with certainty about this book is that no matter what you think you expect from this book, you can’t be sure you are right until the last sentence has been read.
If you are looking for something different, something surprising and still fast and easy to read –since the writing is really nicely done that you can read it fast and still get every detail and get to the deeps of the story fast and without getting board or having to put the book down- then this book should be on your list and you should try it. Read it over the halfway point –its not that hard! Its only about 120 pages!- and let yourself be taken away into the twists and turns of a very surprising story that you do not see coming when you expect a rather simple paranormal YA book. This is a short book but a fantastic one that packs a punch and a storyline that you will think about for longer then it took you to read this book.
This book was given to me through NetGalley for free in exchange for a honest review.

Instead of making a long ending, since this post is long enough and i said all that i wanted to say. I am just going to say my typical: