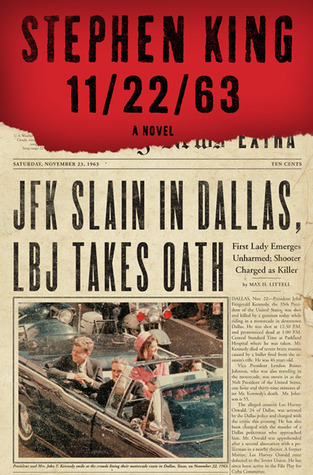 "Life can turn on a dime - or stumble into the extraordinary, as it does for Jake Epping, a high school English teacher in Lisbon Falls, Maine. While grading essays by his GED students, Jake reads a gruesome, enthralling piece penned by janitor Harry Dunning: fifty years ago, Harry somehow survived his father's sledgehammer slaughter of his entire family. Jake is blown away.... but an even more bizarre secret comes to light when Jake's friend Al, owner of the local diner, enlists Jake to take over the mission that has become his obsession -to prevent the Kennedy assassination. How? By stepping through a portal in the diner's storeroom, and into the era of Ike and Elvis, of big American cars, sock hops, and cigarette smoke.... Finding himself in warmhearted Jodi, Texas, Jake begins a new life. But all turns in the road lead to a troubled loner named Lee Harvey Oswald. The course of history is about to be rewritten... and become heart-stompingly suspenseful."


Favorite thing/moment in the book:  The writing and just how King wrapped it all up

I honestly think that this is worth reading for everyone that loves good writing. But especially people that enjoy time travel story, or just overall interesting different kinds of stories. But it is worth reading no matter what you enjoy reading because it doesn't feel overly science fiction, or generally just overly unrealistic. So i really think that anyone would find something they enjoy in this book.


First thought after finishing the book: Fantastic story, beautiful writing, this is the King i feel in love with!


This is the second time i read this book and i only got around to review it now, because... well i am a bit slow apparently.

But this book, you guys! This book!

The writing is wonderful.

And even though i did not love the characters -any of them really- i still thoroughly enjoy this book.

I loved how King wrote the time travel situations, how he connected everything and at the same time how it all worked became only clear when he wrapped the book up.

I love how the characters work together and how Jack just doesn't want to believe that time travel is really something that can happen at the beginning.

Because honestly... that is just not something that you would believe right away, even if you experience it yourself for a few minutes. Its just... so unbelievable. So i loved that King made it clear that his main character was not a believer right away, simply because he went back and got a drink.


I also just... i really enjoyed that King didn't try to solve this "Kennedy mystery" about who killed him or how he was killed. If it was one shooter or two or just... King did not go into that and i personally love that.

Because i think that Americans could write at least 10 book the size of this one just speculating about how Kennedy was killed, who did it and how it all happened. If Oswald did it or not...

But really honesty, does it matter? To me it clearly doesn't because it does not change anything.

I just enjoyed how King did not try to make the Kennedy portion of the story a mystery, but rather the time travel itself and how the characters would behave the mystery aspects of the story.


I honestly could go on and gush about this book for a while, but since i feel that i already said the same thing a few times, i just going to stop.

And simply say that you should all just go and read this book.

Because it is beautiful. And wonderful. And deserves to be read.

And once you read about the first 150 pages you won't even notice how big it is. So just pick it up. And read it. Because it is a wonderfully written piece of literature!

Have you guys read this book?
If you let me know what you thought, i would love to hear if you also enjoyed this or if you where one of those readers that thought that King took the wrong route by not pushing the Kennedy shooter topic.