- October 14, 2015
I am on top of the Book review at the moment. Lets keep it that way, and so lets go on with the very first book i read, (started and finished) in October! 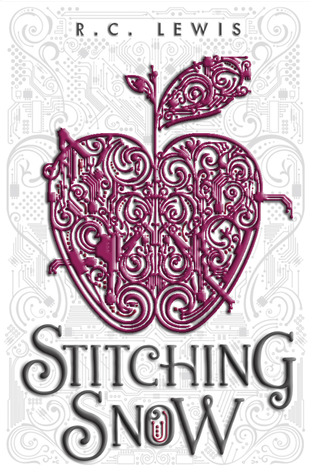 Author: R. C. Lewis
Language: English
Type of book: Hardcover
Pages:  328
Overall rating: 4.5 out of 5
Book series: yes, apparently would be interesting
Book received through: bought it myself
Summary on the book:

"Princess Snow is missing. Her home planet is filled with violence and corruption at the hands of King Matthias and his wife as they attempt to punish her captors. The king will stop at nothing to get his beloved daughter back -but that's assuming she wants to return at all.

Essie has grown used to being cold. Temperatures on the planet Thanda are always sub-zero, she fills her days with coding and repairs for the seven loyal drowns that run the local mines. When a mysterious young man named Dane crash-lands near her home, Essie agrees to help the pilot repair his ship.... "


Favorite thing/moment in the book: Great writing, interesting characters and mostly pretty well explained and thought out world and character building that makes sense and the reader can follow along.

If you want a different and interesting fairytale retelling. Or just a general good story. YES!

I also think that if you loved Cinder then you will definitely enjoy this series. It is different, but it has similar elements, of being set in the future, both girls being mechanical talented and there are different planets and science fiction elements all set around a fairytale retelling.
Get the book here: Book Depository
Add to Goodreads

Nicely developed characters -that do have some little flaws but overall are done very well!- and good world building. Fantastic writing and interesting spin of a Snow White retelling. And a real ending!


I am going to start with everything that i liked and then list the few things that i would have loved more if they would have been done a bit different.

So first of all:

I liked how kick-ass Essie was. She is the main girl and fantastic. She doesn't let others walk all over her. She is a very nice independent woman.

She knows what she can do and does it. And even though she clearly would love to hear a bit more that she is appreciated she still does what she has to and doesn't complain about it. So that is fantastic.

And lets just say that the seven dwarfs as robots? Love that idea.

Not only because i love robots. I mean who doesn't? But the idea that there are this seven robots build by Essie that have all some kind of flaw -for example Cusser who can't stop swearing, or Tick Tock who loves to let things explode. Such a nice spin, keeping the overall idea (seven "helpers") but exchanging what they are and what they do.

I also liked that that Essie was living in poor conditions. Her live is not easy when she is introduced! Not only does she live in a very poor area, but she is also a woman in a mining area surrounded by -yes you guess it!- miners! And since she is not working as one, it is hard a bit difficult for her to fit in.

And that as i said already, she is surrounded by men that see her as a piece of meat that should be thankful that she it with them and that she should show that thankfulness in form of sexual favors. She doesn't, by the way, but still that is a rather real aspect i think. She is in a Miners town. Where people are not necessary the smartest and don't see a woman as more then something that spreads her legs.

Hey just saying it how it is! And this book kept it real. You have to appreciate that!

The story picks up after the first 50 to 60 pages and really starts to gain momentum. Not that it is really slow or boring before that. Just saying. That if you read this and are not into it right away, read through those pages and then enjoy it even more!

I liked how it all build up and then came to the point where Essie has to decide what she is going to do and how this books shows the struggles she has, deciding if she wants to do what is right for herself, or do what she knows her mother would want her to do.

I also liked how the romance was introduced into the story. Essie is not a pushover character and so having her not being able to see the guy and be in love was perfect. The story builds up very slowly and real in a way. They spend time together and it happens naturally and not insta-lovey. So points for that, Lewis. Nicely done!

And lastly, this book, it had a real actual ending. And i mean that when you read the last sentence the book is done. And it is wrapped up rather nicely. And yes technically Lewis could continue on with the story if she wanted to, but the book has an ending that is good. Not open ended, no questioned unanswered. This book is actually finished. And that is rather rare, so i was so excited about that that i had to mentioned it!

So lets get to what i didn't enjoy too much:

I did not love the constant hints of abuse that Essie had at some point in her life because of the constantly pointed out fear of being touched if she is not the one inciting the touch. But we never really get an answer about how far this abuse went. Still it was an interesting spin on the entire tale, so there is also that aspect of the whole situation.

The other is that i found the overall climax moment happened very fast and could have done a bit better. It was bit as if Lewis decided that she didn't really know what write now, and just decided that now the action would take place and the book would end after.
What i am trying to say is that it seemed rather abrupt, at least it felt that way to me, from building towards the climax point -the actual action situations- and then all of a sudden being in the middle of the action and a few pages later being already over it all and reading the last few pages.

That being said, it was not badly written! I would just have liked a bit more of a build up to the actual action scenes, but Lewis didn't do it too badly. I just noticed that i was bit surprised that all of a sudden i was in the middle of the final action events and i thought i mention it. Because... well why not?

All in all i clearly enjoyed this book.

This is actually my first re-telling that i can say i enjoyed and had fun reading, where i found nothing to important lacking or missing or to similar, but at the same time Lewis didn't make this story too different that you no longer notice that it is a re-telling of Snow White.

Lewis really did a fantastic job with this book and you should all read it if you want a fantastic retelling and a nice different story with a pretty kick-ass female character!

And i can honesty say that i am so excited to have Spinning Starlight (the second book in this re-telling series by Lewis) already, even though you all can get it now as well since it came out on the 6th of October, and reading that book soon!

Have you guys read this book?
If you did you enjoy it?

Or have you never heard of it? If so what do you think?
Let me know.
Talk to me. I am a curious person that wants to hear other peoples options! So lets talk!

Let me know what you think!