lets just not talk about this.

I did want to share this review -finally- because i am currently having a GIVEAWAY OF THIS BOOK! So head over to my video, leave a comment up until to the 1th July and be entered! If you want to read this that is.

So lets get into the review and share the link, shall we? 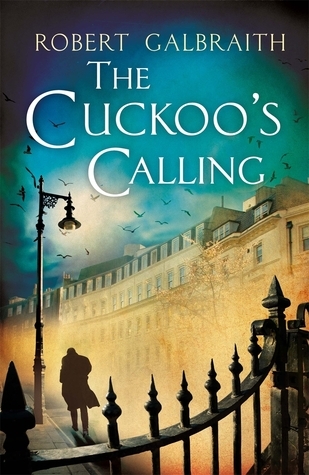 "After losing a leg to a land mine in Afghanistan, Cormoran Strike is barely scraping by as a private investigator. Strike is down to one client, and creditors are calling. He has also just broken up with his longtime girlfriend and is living in his office.Then John Bristow walks through his door with an amazing story: His sister, the legendary supermodel Lula Landry, known to her friends as the Cuckoo, famously fell to her death a few months earlier. The police ruled it a suicide, but John refuses to believe that. The case plunges Strike into the world of multimillionaire beauties, rock-star boyfriends, and desperate designers, and it introduces him to every variety of pleasure, enticement, seduction, and delusion known to men."

Favorite thing/moment in the book:  The ending! The entire ending was so brilliant! It completely turned me around not he book and made me pick up the second book right away!

Worth reading?
Yes. This first one is a bit long and breathy feeling, but that is mostly introductions and i feel a bit like Rowling didn't really know where she was going and what she was doing with this story -at least for the first half of the book. But this book is a must read for the second book of the series and that book is worlds better then this one. And this one is by no means bad.
So yes, read this book! A fantastically unique crime book!

Full review:
First thought after finishing the book: How can that ending exist with that start in the same book? And what the heck am i supposed to do now other then pick up the second book right away?

If you want a more detailed but still non-spoilery review? Please check out my video review :)

I was not the biggest fan of this book for about 3/4 of it.

Because it was a bit boring and written in a way that felt very long and unnecessary.

I mean i don't need a description of a pub to be able to picture the main character sitting on the bar and throwing back pins of beer! I just do not need the detailed description.

So the earlier parts felt very long and i really did consider putting this book down.

But it good so much better, it got fantastic!

This book does feel very much like a first book in a series, it builds up a lot of background for the two main characters - Cormoran the Detective and his secretary Robin- and there are lot of family and drama moments that have to do with the personal life of those two that i personally could have gone without (looking back at them now after reading all three currently published books it makes sense! So there is a sense to the madness! but at the time and reading that first book? I could have edited the crap out of those scenes!) and felt like the book dragged on forever.

Even if the writing was as wonderfully magnificent as Rowling always writes.

But once that book picked up? It goes from snail speed to lighting speed in not even three seconds and you are on board of that and just try to hold on to that bad boy with all you can do.

So as i said, the beginning? Not the biggest fan of, but once Rowling found her stride? She traveled into a different universe once again.

That being said, this is overall a very unique book.

We completely follow along with Cormoran, how he goes about trying to solve the case, what he connects and how he figures the case out. It reminded me a bit of Sherlock Holmes, only that the reader actually can follow along the train of thoughts and try to figure out who did it at the same time, because we get all the details.

Which as the main think that i found the books bit boring at the beginning because we get ALL the details, not only from the detective work but also from the private situations. If Rowling ould have only focused on the detective work i think this would have worked so much better!

I loved the build up and the momentum it picked up until the end.

And that ending?
Can i please get a fan? And maybe some oxygen?
Because even month later i feel a little breathless thinking about it.

This book was a master piece.
It was different and unique and such a "edge of your seat" "what the heck is happening here" "who did it" kind of book that you would not believe it when you start this book.

So go on guys, if you are hesitant? Don't be.

Pick this up. Get through those first 200 pages.
And then get sucked into the Rowling vortex once again!

Have any of you guys read this book?
Loved it?
Hated it?
Feel middle of the field?
Loved the ending?
Hated it?