In the Midst of Winter | Book Review

Another good book i recently read and i wanted to share!

And keep the momentum going i seemed to have going right now, with pretty regular uploading. (GO ME!)

In the Midst of Winter 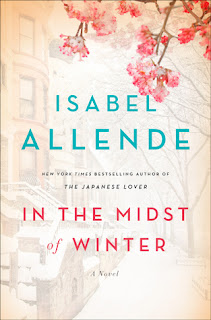 Written by: Isabel Allende
Release Date: (english) October 31st, 2017
Genre: Fiction, historical fiction, literary fiction, Adult fiction
Pages: 352
Goodreads
Book Depository
Summary:
Richard Bowmaster - a 60 year old human rights scholar - hits the car of Evelyn Ortega - a young, undocumented immigrant from Guatemala - in the middle of a snowstorm in Brooklyn.
What at first seems just a small inconvenience takes an unforeseen and far more serious turn when Evelyn turns up at the professor's house seeking help. At a lost, the professor asks his tenant Lucia Maraz - a 62 year old lecturer from Chile - for her advice. These three very different people are brought together in a mesmerising story that moves from present - day Brooklyn to Guatemala in the recent past to 1970s Chile and Brazil, sparking the beginning of a long overdue love story between Richard and Lucia.


Worth a try, it might not be for everyone but it will defiantly become a new FAVOURITE for some people, so if you are interested, read it!

The writing was great, the idea was fantastic... the actual book a bit disappointing.

What i would recommend with this is that if you are interested in reading this book know this:
The english translation is beautifully written, but the plot itself is very wide reaching, telling four different story lines at the same time and mixing them together in a way that i personally didn't love.

But if you don't mind different plots mixing together as if they are connected even thought they are not, highly recommend this book.

If you are more like me and you do not necessarily want to read plots mixed together that makes them feel like backstories of peoples lives are compared to one another simply because they are told in bits and pieces that make it seem like "lets see who had the hardest time!", maybe don't read this one!

Things i loved:
- The "older" characters!
We have a 62 year old woman and her landlord/friend that is around the same age (maybe a few years older) and its fantastic to see a book with more characters that are not 19 or 20 years old, especially in adult books!
its nice to just have some more mature characters in a book, that don't just play the role of the batty grandmother!

- the writing
i am given a lot of credits to the translator for that one, since i have read a previous book by Allende that was written very choppily and not at all enjoyable to read. So i am guessing that Allende's actual writing style is somewhere in the middle of this beautifully written piece and the almost unreadable other book i read by her! I could be wrong about that i can't read Spanish to say for sure, so if you can, please let me know!
so points to the translator that made the entire story so nice to read! The writing just worked very nicely and made the reading super easy even in moments that i felt a bit like the actual plot dragged on.


What i didn't like:
- the constant switch between the background of three characters and the "now" where they are together in Brooklyn telling those stories
Let me explain that a bit:
I think the immigration stories of the two women are great! Very timely, very fitting, nicely done.
And even the backstory of the man was interesting.
But it was a bit much in my option to mix all those three different yet similarly toned stories together in this way. It took away from the actual stories themselves to have them basically compared to one another. (at least that it what it felt like to me!)

That might be because i found the entire Brooklyn side of the story strange and didn't really understand why that was necessary for the other parts of the book!

To me it just felt like Allende tried to fit too much into one book.
Not sure if that was because she wanted to have the book a specific length and didn't know how else to get there, or if she personally thought it all fitted together the way it is written... i have no idea.

But for me it was too much, too wildly almost randomly mixed together that it felt disrupting and not at all like i personally enjoy my stories to be written.

Still it is not a bad book.

It has fantastic points.

I especially love that Richard (the main man) pretty early on in the book complains about all the sex scenes in movies that feel to him like the film makers just did not know what to do with those 15 to 20 minutes so strange sex scenes that have nothing to do with the rest of the movie were added into it! And how he misses the times where those moments where hinted at with closing doors or clicking of the lights.

because yes! Thank you! I felt that way for YEARS! So its so nice to see someone mentioning how unbecoming, unnecessary and stupid those many sex scenes are! Which sadly doesn't only goes with movies, but the endless amounts of books that also add unnecessary descriptive sex scenes when it is completely unnecessary or has anything to do with the story, plot or book itself and is just about as fitting as it would have been if the author would describe the main character picking his nose or sitting on the toilet!


going off on a tantrum here! Sorry.

I just loved some parts of the book, some bits of the characters immensely, i could see clear understanding between how Allende sees the world and how i myself see it.

So there were defiantly great bits in this book.
But sadly a lot of it just didn't work for me personally.

Its still the first book of hers that i actually partly enjoyed.
And even though this book wasn't as fantastic as i wanted it to be or hoped it would be or gave me everything i expect this author can do, it still showed me that i just have to try a bit harder with this author, and find the hidden gems that she surely has to offer that are perfect for me!

Have you read any Allende so far?
Any recommendations from all her many books which one i should pick up next?
Let me know, lets chat!